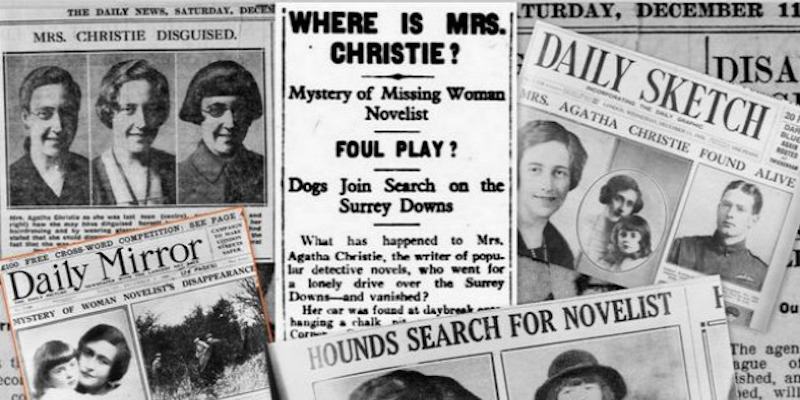 Like many good stories, it started on a cold, dark night. Agatha Christie, having been overheard arguing with her husband, kissed her sleeping daughter goodbye and, with a crunch of gravel, drove off into the night. The following morning, her Morris Cowley was discovered crashed on the edge of a chalk pit, headlamps still blazing, her coat and a bottle labelled “poison lead and opium” abandoned on the back seat.

For the press, it was a gift: a famous murder-mystery writer had gone missing in highly suspicious circumstances. Headlines around the world revelled at Life imitating Art; a giant manhunt was launched; and as the days passed, famous crime writers were quick to offer their theories. Had her husband, who was having an affair, bumped her off? Had she drowned herself in the nearby reservoir and framed him as revenge? Was it an elaborate publicity stunt for her latest novel?

For Christie fans, the story is a familiar one. But for me, the most compelling part is not the parallels with her stories but, rather, the opposite.

Christie’s fictional mysteries are always solved. Denouements often take place in drawing rooms. A detective or detective figure gathers together a community disrupted by crime and suspicion; chins are stroked; eyes are beady; the culprit is eventually pinned. The murderer, it turns out, is the person you least suspected, even if, in hindsight, they are the most obvious. One Christie fan I know read every one of her 66 books in his teens and in only one of them did he spot the killer. Few guess even as many as that. In all cases, when the “truth” is finally revealed, order is restored and chaos neatly packed away.

But Christie’s real life mystery has never been fully unlocked. When she was discovered 11 days later in a hotel in Harrogate, she claimed amnesia and then never spoke of the incident again. Even her Autobiography, published posthumously, skips over this period as quickly and dismissively as the famous ellipsis in Roger Ackroyd (published, as it happens, that very year.)

Solving a mystery reduces it to a puzzle, one that can be answered correctly and then put away. It’s fascinating until that very last piece, then satisfying, but also complete. Ready to put back in its box.

In an unsolved mystery, questions linger.

We have much to learn from the Golden Age detective novel, but perhaps these days there’s something more to be said for a mystery that is not quite solved. When I set about writing The Truants, I wanted to play with many of the tropes of murder mysteries that I loved: the kind of twisty, layered narrative that has a reader pitting their wits against the author in a game of double and triple bluff, that keeps you alert and guessing until the end (or is it the end?). But even more than that, I was inspired by unsolved mysteries: those stories, either in real life or books, that have never been fully nailed down, whose unanswered questions leave ghostly traces.

News stories about people who have vanished and unsolved crimes have a shelf life, it seems, much greater than even the most labyrinthine crimes that are eventually discovered. Those with literary twists live longer still. In Antoine de Saint-Exupéry’s Le Petit Prince, the little prince disappears at the end of the story, leaving only an echo of his laughter among the stars. It was an uncanny foreshadowing of what would happen to de Saint-Exupéry himself. His plane vanished on a sortie over France during the Second World War, prompting decades of investigation.

When, forty-four years later, a fisherman discovered a silver identity bracelet bearing the names of de Saint-Exupéry’s wife, Consuelo, and his publisher, it was an emotional moment for the French, prompting even more searches in which new clues surfaced. Had the corpse and plane wreckage been discovered soon after the disappearance, with enough clues to resolve these questions, would the literary pilot have become the national icon that he then did? Maybe. But there is something about his vanishing that cemented a sense of the magic about him, eerily like the little prince in the stars.

Sometimes the mystery is not entirely of the author’s making. In Charles Dickens’ fifteenth novel, The Mystery of Edwin Drood, the title character disappears on Christmas Eve. Although most of the clues point to a murder committed by Edwin’s jealous, opium-addicted Uncle Jasper, Dickens died before the novel was finished. With only a few tantalizing notes sketched out in Dickens’s hand, he leaves us with an infinite game of hide-and-seek. In deciding on the fate of Edwin Drood, in trying to fill those almost-blank pages, the reader becomes not merely the sparring partner of the author but, for a while at least, they become the writer themselves. The fact that Dickens’ unfinished book is titled a “mystery” rather than a “murder” might have been a stroke of luck—for us, if not for him—but for me it is also the best clue of all to its endless appeal.

Stories without endings are hard to pull off. Readers can feel cheated, and understandably so. After such a long courtship—of teasing, bluffing and misdirection—a satisfying pay-off seems to be the only fair way to end the night. But in the case of Agatha Christie’s disappearance, what pulls me back time and again to the facts of the story is not what can be solved, but what cannot. Certain facts shimmer. Christie signed in to the hotel register as Ms. Theresa Neele—using the surname of the woman that her husband had just revealed as his lover. She used the same name to post an advert in The Times of London, asking for relatives to get in touch. She vanished on the heels of writing arguably her best book, in which the narrator itself is not to be trusted. She danced in the evenings in the hotel bar like a woman very far from heartbroken.

So what was going on in Christie’s mind, either consciously or subconsciously? Was she in the grip of a kind of madness precipitated by the recent loss of her mother and the terrible shock of her husband’s betrayal? Or was there something more pre-meditated going on, a vengeful framing of a murder scene in the abandoned Cowley and then a coded message to her husband, or perhaps the public—a desire to uncover this emotional crime, to shame the lovers publicly?

The murderers in Agatha Christie’s novels always have a motive. In real life, motives are often more elusive. The mystery of what is going on in someone’s mind—the whydunnit, rather than the whodunnit—is so often tantalizingly out of reach. Perhaps, in Agatha Christie’s case, even to the woman herself.

Golden Age detective novels seem to be having a revival. For years, they were not taken seriously, treated as middlebrow, the book world’s equivalent of the soap opera. Now people are being drawn back into its intricate weave. But, I’d argue, Christie’s 11-day disappearance has a special place for her followers precisely because it offers a dash more ambiguity and open-endedness than her own novels.

The enduring mystery of Agatha Christie’s life is how someone so enormously successful, so globally celebrated, so significant in the lives of hundreds of millions—no, in fact, billions—of people lived so long and remains so unknown. In her stories, the character of each and every person in the room was exposed. In her life, she left us guessing.

For me, in both her life and her books, she has been an inspiration. As for how that plays out in the mystery of The Truants, well, I wish I could tell you. But if you look hard enough, you’ll find some of those answers. Near the end. In the drawing room.