'It had me gripped' The Daily Mail

'The book you’ll fall in love with' Stylist

'An impressive debut' The Times

'This book will speak to you.' The Observer

'Mesmerising…The Truants is as charismatic as the characters within.' The Herald 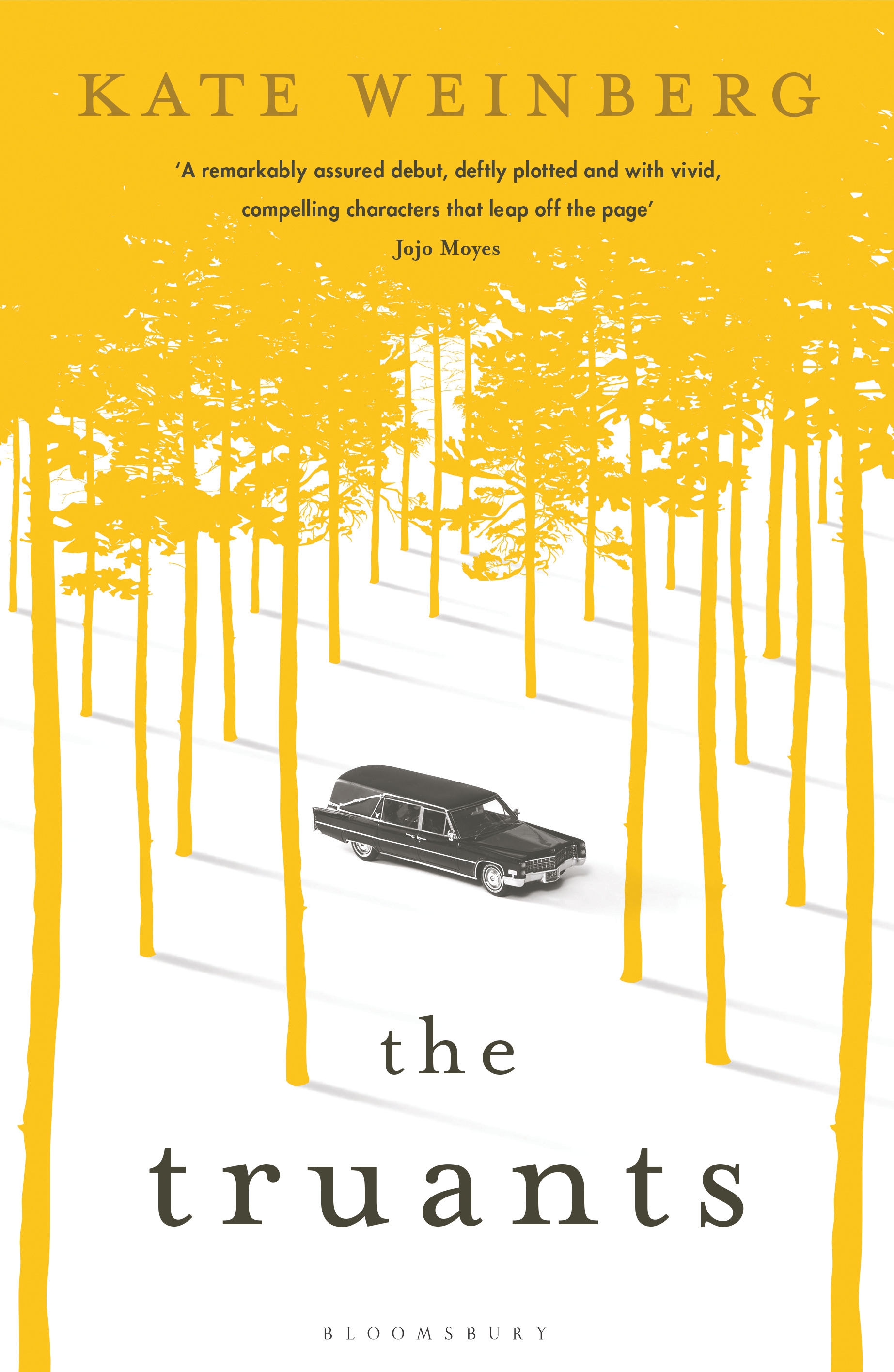 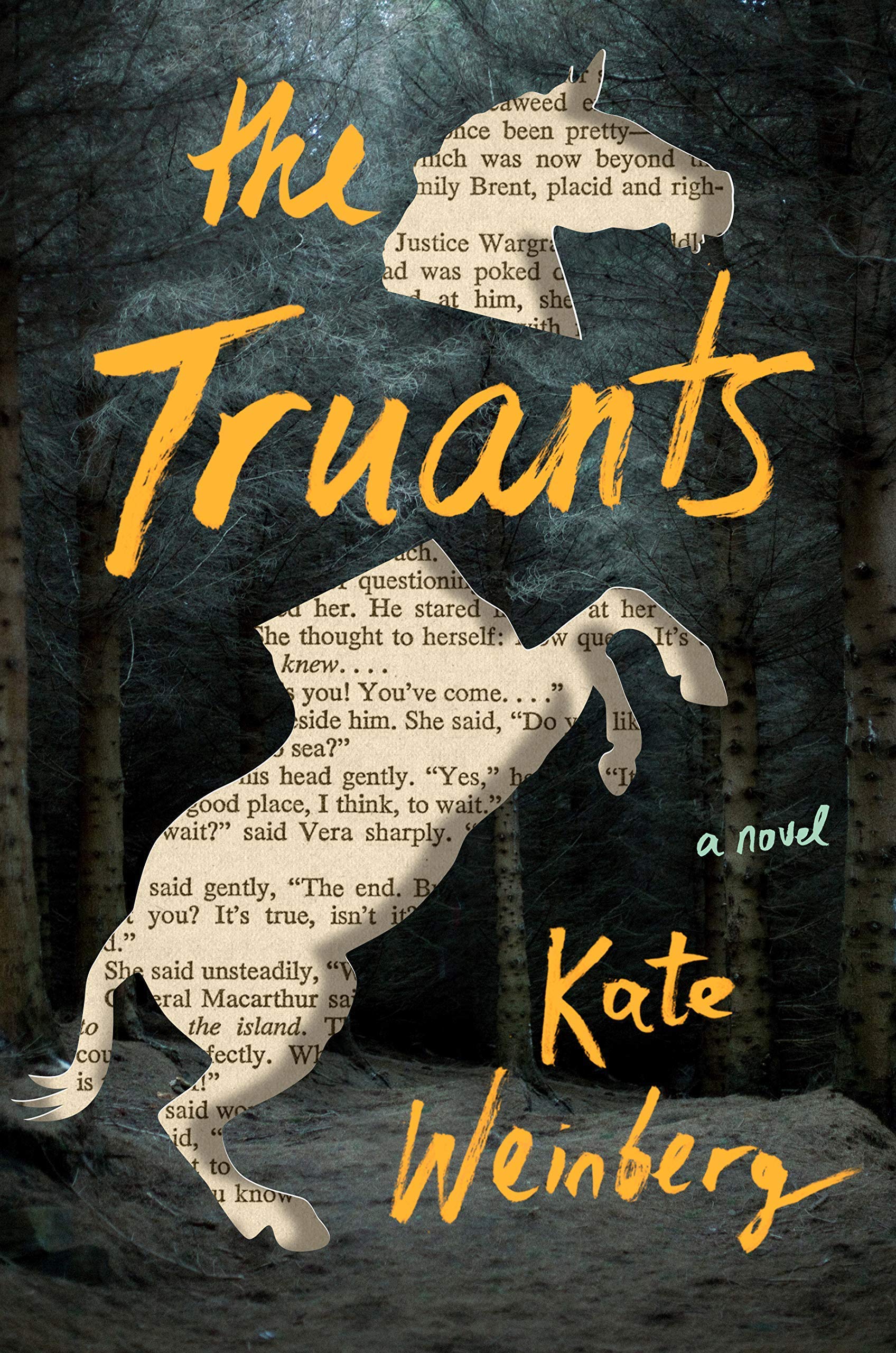 Acclaim for "The Truants"

'There’s a doozy of a murder in Kate Weinberg’s hypnotic debut mystery, THE TRUANTS, one that might have met with the approval of the Queen of Crime, Agatha Christie...Weinberg has created complex, unpredictable players, each with a fully drawn history, and all of them, in one way or another, deeply untrustworthy....the plot {which] keeps taking surprising, even startling twists and turns, ending up — in a switch that would please Christie — on a remote, almost deserted island.' The New York Times Book Review

‘Weinberg’s debut is a page-turning tale of love, death and betrayal on a university campus that riffs on Donna Tartt’s The Secret History while exerting a subtle pull of its own’ i, Books of the Year

‘The fevered trysts of college students are the focus of Kate Weinberg’s clever debut, The Truants’ Irish Times, Best debuts of 2019

‘Kate Weinberg’s debut, The Truants, took eight years to write, and it shows in the multi-layered characters and plot.  If you’ve ever wanted to disappear from your own life, this book will speak to you’ Observer Books of the Year

‘Deft, striking … The parallels between her story’s events and incidents in Christie’s books are ingenious ...’ Daily Telegraph

‘Weinberg herself has an aversion to neat endings, or neatness in general – her plot takes many surprising turns, her characters are multifaceted, and their dialogue pings with curious anecdotes that, unusually, add rather than detract from the whole … The Truants marks [Weinberg] out as a natural storyteller, in the vein of Agatha Christie herself … Startling … Intelligent, fresh … Unforgettable’ Irish Times

‘In this mesmerising debut, Kate Weinberg tackles first love, obsession and the boundaries of self-identity … Hefty foreshadowing and an abundance of twists keep the reader tripping forwards’ i paper

‘As much a coming-of-age tale as a murder mystery, Kate Weinberg’s first novel explores “the sweet spot of heightened possibility before things tip over and get ugly … If there is a moral, it’s that self-deception is a dangerous sin. An impressive debut’ The Times

"Deftly plotted, with vivid compelling characters that leap off the page." Jojo Moyes

‘One of the best books I have read in… forever. I fell in love with these characters and am still mourning that I don’t get to live in their world anymore.... This book is nothing but absolutely brilliant from beginning to end’ Scarlett Curtis

‘Weinberg weaves intrigue worthy of Agatha Christie – you'll love getting lost in The Truants' web of mystery, desire, and deceit’ M. L. Rio, author of If We Were Villains

‘The Truants teases, seduces and thrills but ultimately it's about the best kind of love affair – allowing for the freedom to be yourself’ Miranda Hart

‘Lays bare the lengths to which we will go to feel seen … At once thrilling and heartbreaking’ Meghan MacLean Weir, author of The Book of Essie

‘Reminiscent of Muriel Spark and Donna Tartt. A stunning debut!’ Carol Goodman, author of The Lake of Dead Languages and The Night Visitors

‘Kate Weinberg's The Truants is a deeply affecting, artfully written and entirely gripping story. It evokes university life as seen through the eyes of one of modern British literature's most appealing heroines, and her gradual awakening to the complexity, deceitfulness and amorality of the adult world. The novel combines the best elements of a crime thriller, a campus novel, a love story and a psychological study. It is always beautifully and surprisingly written, has a perfect sense of plot and is consistently clever. Weinberg is a major talent’ Alain de Botton

‘The Truants is a university murder mystery that started a bidding war among publishing houses and is being compared to Muriel Spark and Donna Tartt. It’s set to be the book of the summer’ Town & Country

‘This satisfying coming-of-age novel jives to a thriller-like beat. It’s a debut, though you wouldn't necessarily know it from its assured tone … While Donna Tartt’s The Secret History is a clear influence, it’s Agatha Christie whose work is most explicitly referenced, stoking an ominous sense of impending calamity’ Mail on Sunday

‘The book you’ll fall in love with … With a small band of overly intimate students, a mysterious-yet-inspiring tutor, obsession and a whodunit, there’s much to place it in the same bracket as Donna Tartt but there are also nods to a much-mentioned Agatha Christie. There’s also an ending that’ll leave you thinking and thinking about this plot for weeks, if not months, later; one of the standout books of the summer’ Stylist

‘There are more than a few nods to Donna Tartt’s The Secret History here– the band of student misfits with dysfunctional backgrounds, the professor with oddly intimate student-teacher bonds, plus an overall sense, skilfully seeded by Weinberg, that things are about to take a wrong turn … Threaded into the story are references to Agatha Christie’s novels, with their mysteries and murders and love triangles. The Truants borrows some of these murder mystery tropes, leading us to a dark conclusion that feels satisfying to reach’ Evening Standard‍

‘You know those summer books which draw you in immediately and unyieldingly into their world? That bury you into the characters so nose-deep that when you’re finished, they leave you yearning for the intimate world you’ve just left.Well, The Truants, a debut novel by Kate Weinberg, is exactly one of these … It doesn’t feel like a debut novel at all … The plot is absolutely page-turning … The book makes many references to the mysteries of Agatha Christie which, with its sense of Machiavellian menace, it is remarkably similar too as well as Donna Tartt’s The Secret History. We couldn’t put it down’ A Little Bird 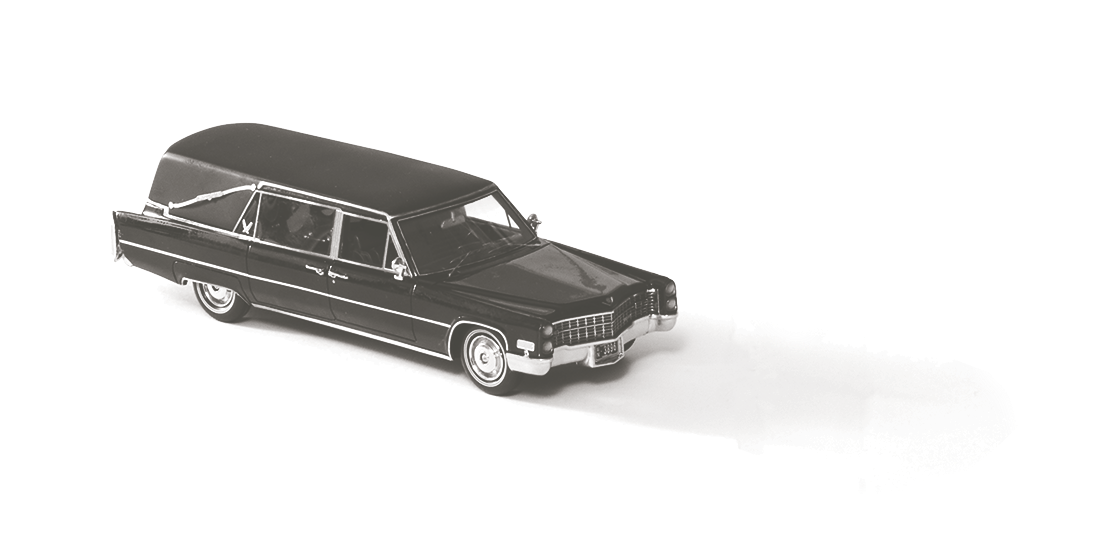 ‘Plenty of secrets lie under the surface glitter … A coming-of-age story and campus novel rolled into one, it is given greater depth by the shadow of Christie, who stalks the pages. With deft characterisation, plenty of mystery and twists in the tale, it had me gripped’ Fanny Blake, Daily Mail‍

‘In this mesmerising debut, Kate Weinberg confidently combines literary suspense and deftly executed narrative, slowly unravelling each thread that tangles first-love, obsession and the boundaries of self-identity … The Truants is as charismatic as the characters within. A riveting read’ The Herald (Glasgow)

‘I love a coming of age story and The Truants hit my sweet spot … Think The Secret History meetsAgatha Christie. This might be Kate Weinberg’s debut novel, but her assured writing and ability to create compelling characters makes me hope there’ll be many more novels to come’ Red, '10 of the best books on friendship'

‘Kate Weinberg confidently combines literary suspense and deftly executed narrative, slowly unravelling a tangled tale about first-love, obsession and the boundaries of self-identity … The Truants is as charismatic as its characters. With plenty of references to Agatha Christie, and echoes of Donna Tartt’s The Secret History, its hefty foreshadowing and abundance of twists keeps the reader tripping forwards. A riveting read’ Scotsman

‘This deftly crafted debut novel is riven with suspense … With charismatic characters, this is a riveting read and one that masterfully tackles first love, obsession and the boundaries of identity’ Sunday Post

‘With intrigue sparking throughout, Weinberg's immensely compelling debut novel explores the years-long reverberations of a fractured friend group and echoes Donna Tartt's The Secret History, Tom Wolfe's I Am Charlotte Simmons, Richard Russo's Straight Man, and Katie Lowe's The Furies.The mystery at the novel's core befits Agatha Christie [and] unravels at a nearly perfect pace … This slow burn of a novel explores the headiness of favouritism and the danger in meeting one's heroes’ Booklist

‘A must read for fans of mystery novels … Cleverly written and relentlessly intriguing,The Truants is the perfect novel for inquisitive minds to escape into’ Marie Claire, Top five novels for cosy Christmas reads

"One of the best thriller debuts in recent years... this propulsive, pitch-perfect thriller has something for everyone." Kirkus starred review. 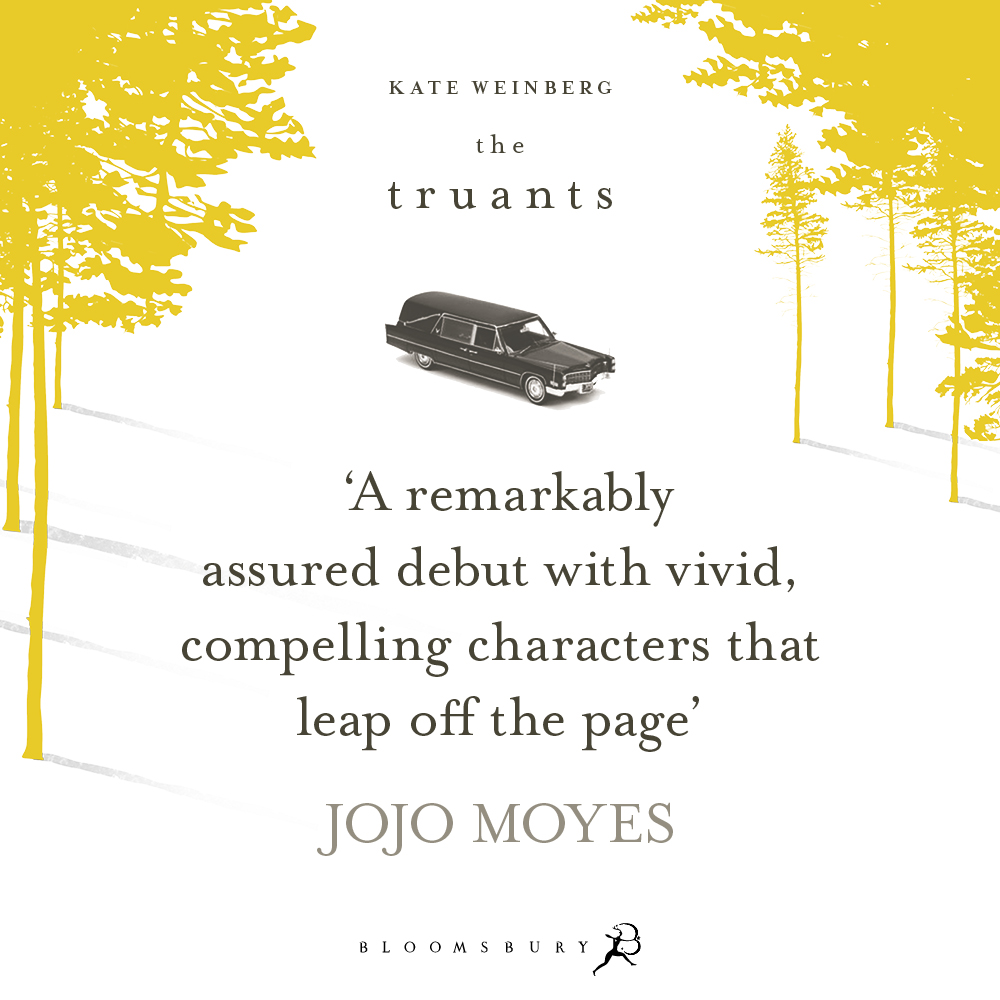 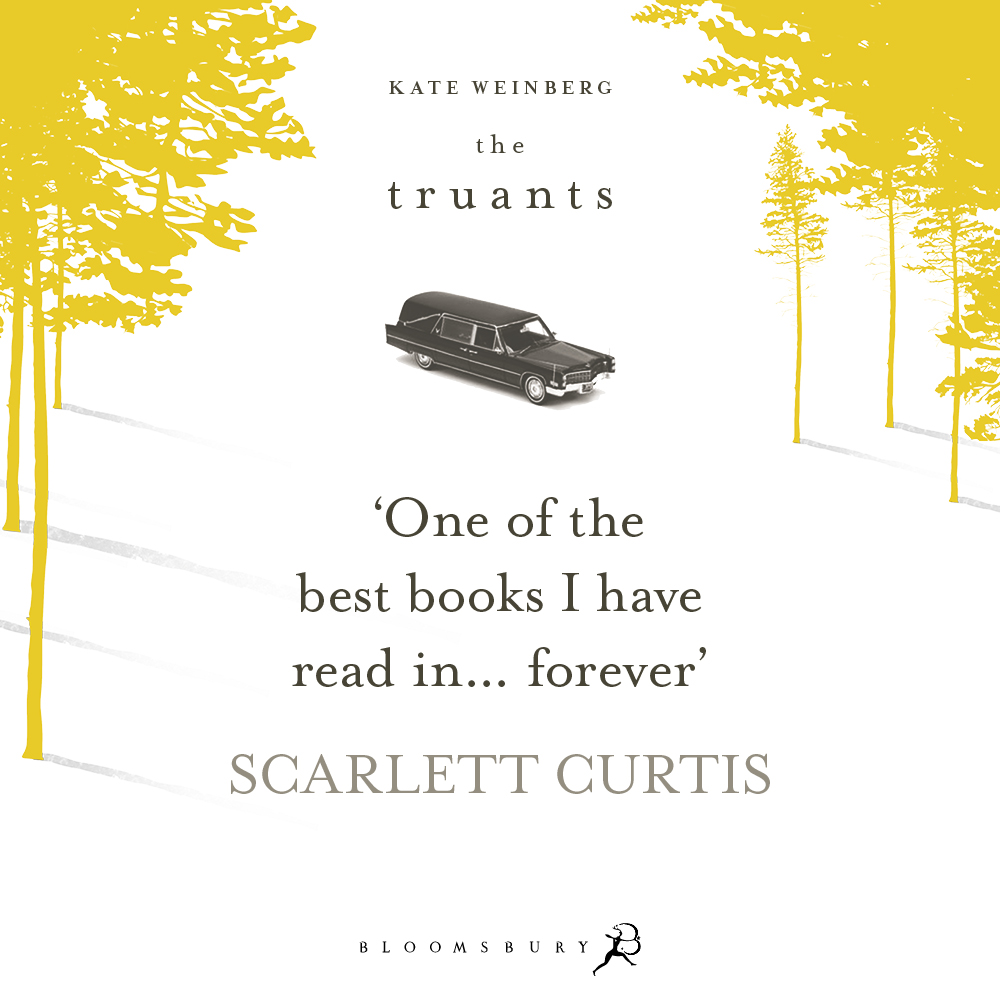 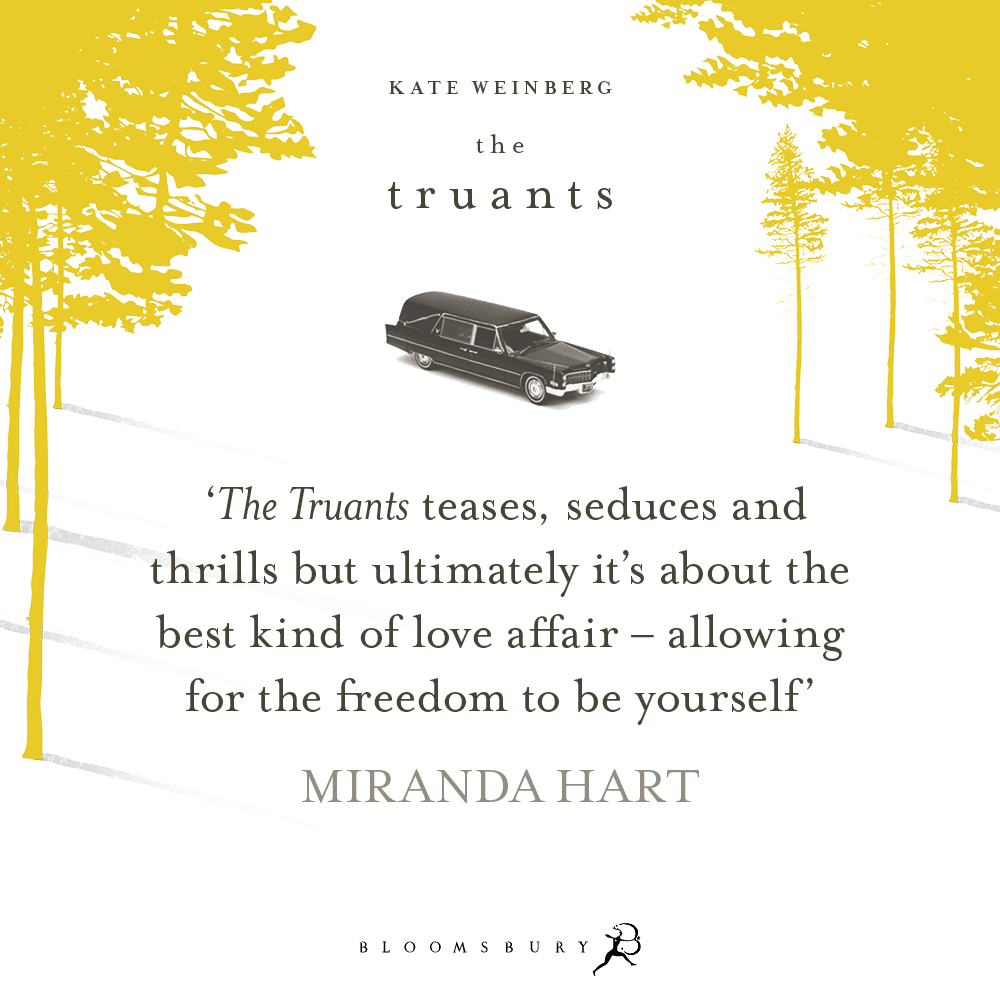