John le Carré offered a piece of advice to a struggling novelist. She'll never forget it. 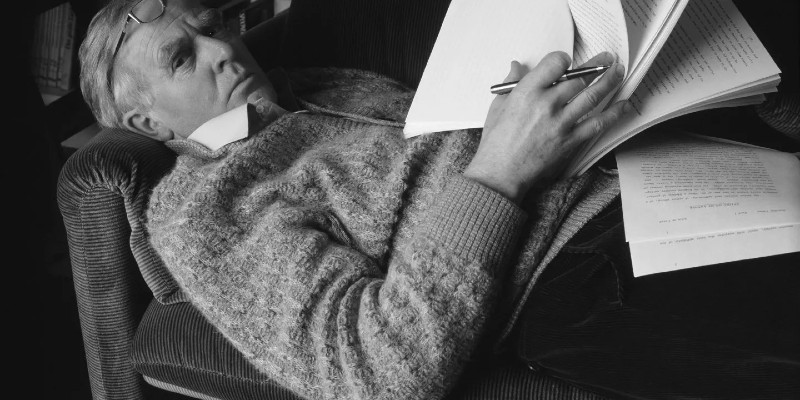 People say you should never meet your heroes. When, in 2011, I sat next to David Cornwell (aka John le Carré) I was more worried for my hero meeting me. As the bright-eyed 81-year old leapt, smiling, to his feet, a kink of snow-white hair kicking up over the collar of his dinner jacket I made a pact with myself: Under no circumstances should I bring up the crime novel I am struggling to plot.

Crime novels (including spy novels) are best known for their plots. Almost all reviews of successful crime novels will talk about plot before they mention character. Grisham’s plots are “intricate”, Agatha Christie’s are “ingenious”, Ruth Rendell’s are “twisting”. But le Carre, this ex-spy and son of a confidence trickster, had pulled off the greatest literary trick of all: his plots were knotty and thrilling, but his characters were uncompromised by them. On the contrary, they always drove the story. How was I, a writer more interested in character than plot, but also intent on writing the kind of story you couldn’t put down, to take a leaf out of his book?

Heist movies, to my mind, epitomise the problem. They are well known for their plots—think The Thomas Crown Affair, The Italian Job, The Sting. The heist is brilliantly suited to the screen: the sleights of hand, the optical illusions, not to mention the car chases, all contribute to the thrilling ride of a clever story. But take a close look at the characters in them and you’ll see that, despite great acting, they rarely pass E.M. Forster’s test for “rounded characters”—rounded characters grow or change substantially during a story, flat characters do not. Perhaps this is why there are so few great “heist” novels. The book I was trying to write was not a heist, but its crime relied on several twists and tricks of the light. The problem was that they were bending my characters all out of shape.

“So when are going to ask me about your novel?” said David, twiddling his fork with a small smile. The creator of the great, flawed British spy George Smiley and of Karla, the silently watchful Soviet spymaster, had not been fooled by my prevarications around the journalism I had recently given up. I asked too many good questions, he told me dryly, to be a journalist.

So I confessed. I was working on a novel with a crime in it, but I had hit a wall. The characters had been living inside me for years now, and I had a premise, a good one I thought—but I was struggling to weave the kind of intriguing plot I admired in his writing without reducing the characters to pawns on a chessboard. Whenever I think of story, I lose the characters, I told him. And whenever I think of character, I lose my story.

“You need to remember this. The cat sat on the mat,” said David. “That’s not a story. But the cat sat on a dog’s mat. Now that’s a story.”

The following day I drew a small pen and ink line drawing and stuck it above my desk. Then I got to work. I started putting cats on mats. I pushed the crime into the wings and fleshed out the characters’ backstories. I thought about unsatisfied cats and reflected on dogs left out in the cold. I scribbled and wrote. When I stepped back the characters had tangled themselves into a cat’s cradle of a plot, born not just from story, but from what drove them.

In 2018, just after my novel was published in the UK, I heard that David Cornwell was very unwell. I wrote to him, telling him how I was sorry to hear that he was ill. I enclosed the sketch that had sat above my desk —a cat sitting on a mat that was labelled “DOG”. Thank you for your help, I told him. It took me some time, but I ended up finishing that novel. You were right: it was all about cats, sitting on dogs’ mats.

David wrote back by return of post. “Your picture made me chuckle”, he said, “I’m sure your novel will win many prizes.” And then a line at the end, that made my eyes prick. “The writing is a great palliative…”

Now I’m constructing my second novel and I’ve put the risk-taking cat back up on the wall. Screen-writers would say the essence of drama is conflict, and in a sense that was the simple lesson that David gave that night. But it inspired me to think about something else too, something that permeates all the novels I love most, that note that le Carré hit, time and again. That he cared about knowing Karla, just as much as Smiley. That transcends politics and even morality. What, he asks, really drives people to do what they do?

I suspect John le Carré wrote every novel, every character, to get closer to this answer. I know that it’s a question I’ll ask that cat every time I sit down to write. And like David, I hope I will never quite answer it.

John le Carré offered a piece of advice to a struggling novelist. She'll never forget it.